Philosophy and Physics to Explain the Universe

Philosophy and Physics to Explain the Universe

The Beatles stopped at tying humanity together. What if, instead, all of the universe was connected at the quantum level, that unobservable fabric that many physicists thinks ties the Andromeda Galaxy to that pen you are holding?

I’ve written about the witnessed paranormal experience (internal link) I had in 1988. Science can’t explain it. That experience cannot be replicated and it lies beyond the scientific method. Yet, it happened. I felt the panic of a tragedy that was fifty miles away. How could I have heard and felt what I did unless some unseen threads connected me to the event? Otherwise, how did I feel what was happening? What do we do when science can’t explain something?

I think physicist David Bohm and philosopher J. Krishnamurti (internal link) got closest to explaining the supernatural more than anyone else. They did so without calling it by that name. They proposed a view in which the paranormal would not be outside of our known universe but within it. They inspired a cadre of scientists and philosophers who continue their work.

Einstein called Bohm his spiritual son. The two had offices next to each other at Princeton and spent countless hours together. Can you imagine trying to keep up with Einstein when he was discussing the universe? Bohm was the Dali Lama’s science advisor. Bohm had a 25 year relation with Krishnamurti in which they discussed how the universe might be explained when science failed to do so.

Bohm was a brilliant young physicist who attracted the attention of Robert Oppenheimer when they met at Cal-Tech. Oppenheimer got Bohm to transfer to Berkley where Oppenheimer was teaching. Unfortunately, Bohm got there at the same time Oppenheimer went off  to set up Los Alamos. Bohm wanted to follow Oppenheimer but the military did not permit it.

Bohm had joined the Communist party for nine months, the real reason to participate in a book club reading of Hagel. That membership tarnished and set back Bohm’s career for decades.

Never-the-less, Bohm contributed many important equations at a distance for the Manhattan Project. His work became so important that the government classified it during the war and restricted Bohm himself from accessing his own research. At this point there was no way for Bohm to complete his doctorate. Instead, Oppenheimer himself simply gave Bohm his Phd.

Perhaps to protect his own reputation, Oppenheimer distanced himself from Bohm as the Red Scare built after World War II. Bohm was once called before the House Un-American Committee where he refused to name names and pleaded the Fifth Amendment.

In that extremely odd time, Bohm was arrested for invoking the Fifth, something impossible to imagine today. The courts quickly overturned his arrest but the damage was done, Bohm was finished in America and Oppenheimer told him to leave the country. Bohm went into self-imposed exile to Brazil, later moving to Israel and then to England.

Bohm wrote a groundbreaking paper in 1952 in Brazil at the height of McCarthy’s power and intimidation. Blacklists existed everywhere. A student brought the paper to Oppenheimer’s attention, asking what was wrong with it. “Nothing,” was the reply. Yet Bohm was untouchable. Oppenheimer put out the word to his fellow physicists that if Bohm’s paper could not be disproved, then it would not be discussed. Which it wasn’t, and it fell into a black hole of academia for nearly 25 years.

Bohm’s life reminds me of Tesla, another unorthodox genius who provoked the scientific establishment and who was consequently shunned during his career.

The Krishnamurti Foundation will be holding an internet viewing and panel discussion of a video on Bohm that is currently on YouTube. You can invite yourself into that event by following the links below. Or, simply click on this link to watch the video.

Don’t be put off by the hokey name of Infinite Potential. That sounds like promotional phrasing for Tony Robbins, rather than what we have here. A regrettable choice of words. The full title is “Infinite Potential: The Life and Ideas of David Bohm.” Trust me, it’s worth watching.

Update: There’s a number of Bohm related videos on YouTube besides this one. At first view, they seem to lapse into malarkey and a kind of fuzzy mysticism that sounds good as long as you don’t try to figure out the specifics. I’m just starting to piece out what is being describe.

My first impression is to approach these new subjects and ideas as short thought experiments. One at a time. There seems to be four or five key elements to understand before the total concept comes into view. Wholeness, implicate order, explicate order, enfolded order, and so on. Although I generally do not recommend Wikipedia except for references, they do have a good article here:

Bohm proposes a different way of looking at the world. He says that we are so conditioned to thinking of the world as being built block by block, part by part, that it makes any other notion difficult to accept. He refers to the universe as unfolding. Unfolding? That’s going to take me a while to understand. Perhaps there are animations on the web that illustrate what he is trying to say.

Intuitively, though, I sense he is on the right track. 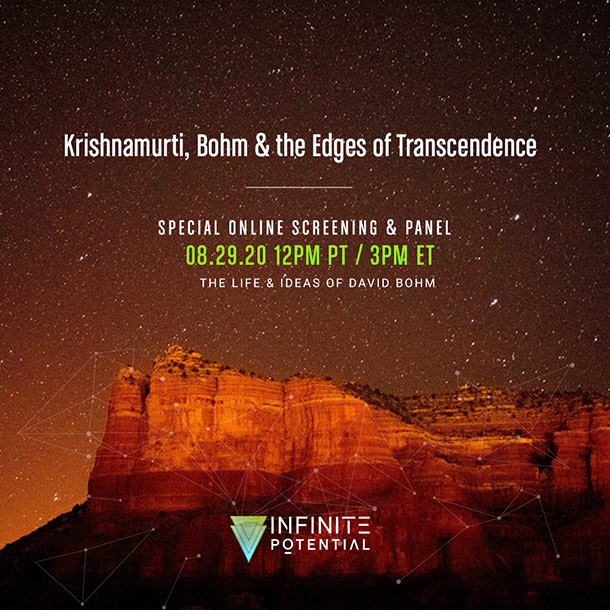 Join us for this online event Aug. 29, at 1:15 PT, titled Krishnamurti, Bohm, and the Edges of Transcendence. Enjoy a live dialogue among distinguished guests including filmmaker Paul Howard, author David Moody, clinical psychologist & mind-body medicine researcher Cassandra Vieten, and President, International Theosophy Society, Tim Boyd. The dialogue will be moderated by Sandra de Castro Buffington and followed by a Q&A with the audience.

If you haven’t seen the film yet, come at noon PT to watch the documentary Infinite Potential: The Life & Ideas of David Bohm and participate in the live chat immediately following the screening. This event is presented by the Fetzer Memorial Trust and Krishnamurti Foundation of America. Reserve your free spot here.

In regards to Krishnamurti, Bohm wrote: “What particularly aroused my interest was his deep insight into the question of the observer and the observed. This question had long been close to the center of my own work, as a theoretical physicist, who was primarily interested in the meaning of the quantum theory. In this theory, for the first time in the development of physics, the notion that these two cannot be separated has been put forth as necessary for the understanding of the fundamental laws of matter in general.”

J. Krishnamurti and physicist David Bohm engaged in a 25-year-long series of far-reaching dialogues. They delved into the nature of time, the self, the ending of thought, and the universal.

David Bohm felt that, at the heart of Krishnamurti’s teachings, was the realization that the confusion and suffering we experience as human beings are rooted in the fact that “we are ignorant of the general nature of our own processes of thought. Or to put it differently, it may be said that we do not see what is actually happening when we are engaged in the activity of thinking.” Krishnamurti observed that “you cannot go through reality to come to truth; you must understand the limitation of reality, which is the whole process of thought.”

These meetings with David Bohm gave renewed urgency to the term “dialogue”. “Exploring together, like two friends sitting under a tree” was how they described their conversations.

If you haven’t seen the Infinite Potential documentary yet, on August 29 there will be an online streaming event at 12 pm PST, and a panel discussion afterward at 1:15 pm PST. This is a free event organized by the Fetzer Memorial Trust and the Krishnamurti Foundation of America. You can register here.

At the KFA we also have an online-only program coming soon: Krishnamurti and His Teachings (August 24-28) will provide an introduction to the work of Krishnamurti. We feel that this program will be particularly useful to those who are fairly new to the teachings. Participants will engage in discussions to gain a better understanding of Krishnamurti’s work.